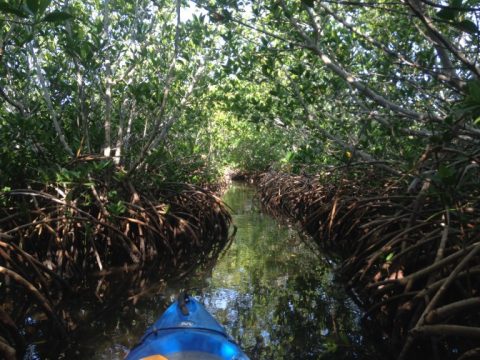 Every Day is Earth Day in the Florida Keys

While the rest of the world celebrates Earth Day on Friday, April 22, it’s business as usual in the Florida Keys.  For sure, numerous events are planned throughout the island chain to observe this annual eco-awareness day.  But in the Keys– home to a vast national marine sanctuary and four national wildlife refuges harboring 24 federally-listed threatened or endangered species–pretty much every day is Earth Day.  By being quiet and honoring their space, you can observe some rare creatures roaming the wetlands, pine forests and hardwood hammocks that dot this 150-mile long necklace of islands.

I recently joined a group of 20 paddlers–including first-time Keys visitors and guides from Florida Bay Outfitters–on a one-of-a-kind, behind-the-scenes kayak tour of the Crocodile Lake National Wildlife Refuge in North Key Largo.  Normally closed to the general public, this maze of mangrove wetlands and tunnels is where American crocodiles — ferocious-looking but relatively shy reptiles–go to feed, rest and build nests.  Between 400 and 500 live in South Florida, and they are classified as threatened by the U.S. Fish & Wildlife Service.

We didn’t spot any crocs during our morning tour; the animals probably heard our splashing and conversation way ahead of our approach and made themselves scarce.  But  our group was treated to sights of migrating pelicans; rolling tarpon; jumping mullet; stately great egrets, a wood stork, and numerous little green herons.

You couldn’t tell by my visit, but croc numbers are on the rise and they are frequently spotted well outside their protected refuge, swimming along the busy residential canals of Lower Matecumbe Key near Islamorada. Alert local residents are careful to safeguard their cats and dogs.

Heading south on U.S. 1, I arrived in Big Pine Key, home to the National Key Deer Refuge– a patchwork of 25 islands where more than 800 of these miniature, endangered deer thrive. Driving slowly along the residential streets of adjacent No Name Key at mid-morning, I spotted at least a dozen Key deer–including does with fawns– wandering and browsing on plants and trees.  A couple of them approached me, obviously looking for a hand-out.  But feeding them is illegal and bad for their health.  I just snapped their photos and moved on.

Another inhabitant of the Key Deer refuge is the American alligator, a federally-listed threatened species. Not nearly as common as in the Everglades, several live in the Blue Hole– an abandoned limestone quarry filled by rainfall– and in other wetlands in the Lower Keys. On my visit to the Blue Hole, I walked out onto an observation platform, looked down, and saw a five-footer lying in the shallows below. It’s kind of a jarring sight because most visitors don’t expect to see gators in the Keys. When I raised my camera to shoot a photo, the gator roared at me! Then a second, unseen gator nearby roared back! A refuge volunteer suggested the animals might be agitated because it was mating season.  In any case, it was really cool.

I ran out of time and never made it to the Keys’ other two national wildlife sites– the Key West and Great White Heron refuges.  These are mostly uninhabited back country islands scattered between Florida Bay and the Gulf of Mexico that were set aside in the early 20th century  as a safe haven for breeding and nesting native birds.  They are best observed by kayak or canoe–quietly and not too close in order to avoid disturbing the feathered inhabitants.  I’ll make a point to do that on my next visit to the Keys — Earth Day or not.