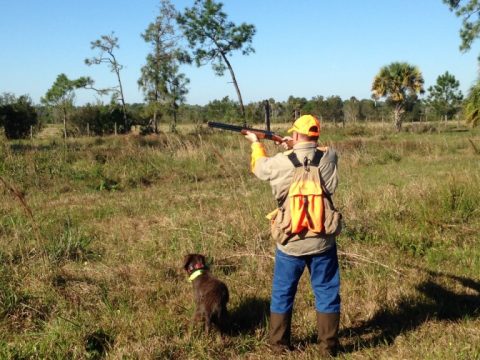 “Artemis!  Let’s go hunting!”  Chad Bumb told his 18-month-old Pudelpointer as they trudged through a rough pasture near Okeechobee.

Bumb had jumped through plenty of hoops to adopt his young hunting dog– a hard-to-obtain German breed widely considered one of the most versatile of bird dogs. This cool, sunny Saturday morning would give Artemis a chance to test her abilities in the quail hunting fields of Pine Ridge Plantation–a 1,000-acre hunt club specializing in wing shooting

The club’s general manager Mike Myers and his helpers had released numerous quail in the fields the night before the hunt.  Now, Artemis and Bumb would take turns with Bumb’s friend Steve Dickinson and his Vizsla hunting dogs Beau and Calvin to sniff out and shoot the birds.

Artemis couldn’t wait.  As soon as Bumb let her go, she charged off into the pasture, sniffing the breeze and galloping to and fro to lock in on the scent.  Suddenly, she stopped beside a squat cabbage palm and held stock-still.

Wielding a long stick, Myers stepped forward and probed the brush as Bumb cradled his shotgun.

At first, nothing happened.  But suddenly a quail hopped up and made a quick flight to the north.  Bumb took aim, fired, and dropped it.

She dashed about 100 feet toward the fallen bird and made a couple short detours before locating it, then picked it up and delivered it to Bumb.

Artemis located quite a few birds that day, some of which Bumb shot and some he missed.  While she didn’t exhibit quite the skill and polish of Dickinson’s sleek veteran Vizslas, the lean, tousle-furred Pudelpointer more than held her own.

Myers usually is leery of his guests using their own house pets as hunting dogs at Pine Ridge.  These inexperienced dogs, he said, either don’t track aggressively enough or they flush birds before the hunter can get his or her gun up.  Myers prefers that hunters choose from among his kennel of  20 English and German shorthaired pointers, who receive more than two years of training before they are sent out with clients.  He found Artemis, Beau and Calvin to be exceptional.

“They’re taking these dogs; they’re tracking with them, pointing them and retrieving them,” Myers said.

Most of the quail the three dogs found seemed particularly reluctant to shed their cover and fly.  Myers said that it was probably because of the many winged predators in the field, and pointed out a kestrel and a bald eagle overhead.  He had to beat the brush repeatedly with his stick to flush the birds, and a couple times found three cowering together in the tall grass.

While the dogs were occupied downfield, a male quail could be heard whistling from its hideout, sounding frantic as it tried to summon the rest of its covey. It shut up immediately at the dogs’ approach.  When the dogs went rigid on point, they were never wrong.

By noon, the hunting party had accumulated a dozen quail, so they headed to the clubhouse for lunch.  The morning’s bounty was packed neatly in plastic vacuum bags for the ride home.

While the humans regaled each other with hunting tales, the canines snoozed peacefully in their kennels.

Here’s what happened when a major state wildlife agency celebrated a milestone anniversary on April Fools’ Day:  the wildlife itself played its own April Fools joke. And it was a great one. …