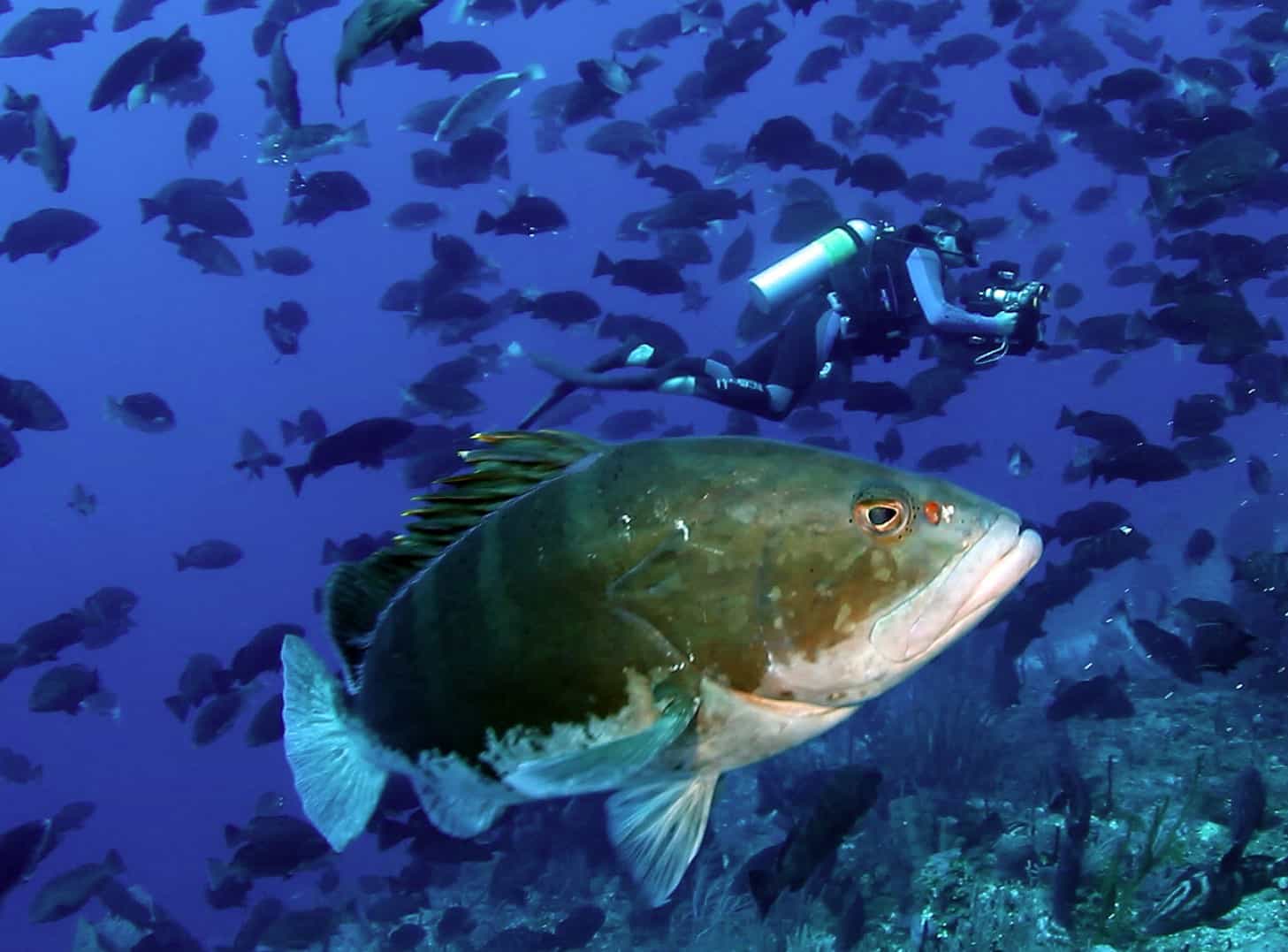 Marine artist/conservationist/cinematographer Dr. Guy Harvey this week is scuba diving at one of the most exciting and ecologically-important sites in the Caribbean– a coral wall about 100 feet deep near Little Cayman Island recognized as one of the largest spawning aggregation sites for endangered Nassau grouper anywhere.

Harvey plans to gather more video footage for “The Mystery of the Grouper Moon”–a documentary he first produced with George Schellenger in 2011.  The aim is to help build a groundswell among Caymanians to continue protection for Nassaus that use the site for reproduction each year around the full moons in January and February.

Harvey’s efforts paid off when the Cayman government extended a harvest ban in the area through 2019.  But he said that’s not enough to ensure a sustainable Nassau population.

“Our goal is to get the population here in Cayman up to 10,000 and repopulate the other islands and bring this fishery back to its former glory,” Harvey said.

Not so long ago, tens of thousands of Nassau grouper– a beautiful, slow-growing, and unfortunately very tasty reef-dweller– reproduced successfully at five sites around the Cayman Islands in winter.  But fishermen quickly figured this out and so decimated the aggregation that the only spawning site left in the area is off Little Cayman.

This pattern of overfishing also occurred at some 50 other spawning sites in the Caribbean and Bahamas, rendering between one-third and one-half of them inactive.

Today, the harvest of Nassau grouper is banned year round in the U.S.; prohibited December through February in the Bahamas, but open everywhere in the Cayman Islands except off Little Cayman.

Harvey would like to see all Nassau harvest closed in the Cayman Islands from November through March, and he’s not alone.

The Key Largo-based Reef Environmental Education Foundation (REEF) and the Cayman Department of the Environment have been researching the “Grouper Moon” for the past 13 years– counting fish; implanting them with acoustic tags; collecting larvae and performing other research.

“The area is spectacular– a wall on the western side of Little Cayman,” he said.  “They spawn at dusk in about 100 feet in the current.  They turn black and white as they spawn– one to two dozen males with one female.  One of the wonders of nature.  Very exciting,”

Harvey said efforts to protect the aggregation– while not as comprehensive as he would like–have achieved some benefits.  In 2010, he said, researchers counted about 2,500 spawners.  Last winter, he said, about 5,000 were found reproducing at the site.

“I get first hand the feeling on how the spawning population has improved from previous years,” he said.  “It really is working.”