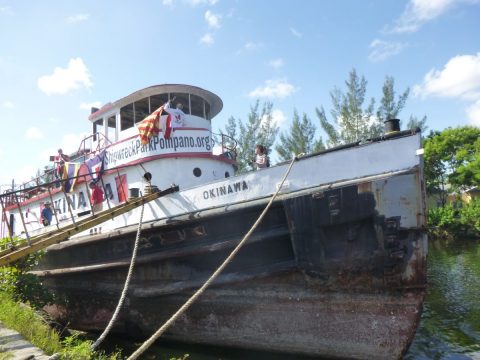 Pompano Beach, Florida’s Shipwreck Park– a collection of 16 sunken vessels located a short distance offshore in the Atlantic–is about to get its first dive bar.  And you can become a patron almost immediately after it goes down.

The fanciful bar named “Midnight Sun”– adorned with sculptures of sea serpents, starfish, and scallop shells and tended by a topless mermaid– decorates the aft deck of the 107-foot tugboat Okinawa while a pair of six-foot metal seahorses grace the bow. The tug will be deployed as an artificial reef in about 70 feet of water at 10 a.m. Aug. 19 not far from its sister ship, the 234-foot Lady Luck, which was put down just over a year ago. Divers from South Florida Diving Headquarters, a Guy Harvey Outpost Outfitter operated by Captain Jeff Torode, will plunge down to check out the new underwatering hole as soon as it’s safely on the bottom.

“Tugs just look cool underwater, ” Torode said. “She’s built like a tank so she’s gonna last forever.  It’s going inside the third reef which will attract a lot of fish and a lot of growth.”

Built of steel in 1953 for the U.S. Army, the Okinawa’s wheelhouse, crew quarters, engine room, and compartments have openings cut throughout so that divers can make their way easily from bow to stern.  The artwork was created by Pompano Beach’s Dennis MacDonald who also decorated the Lady Luck.  The mermaid is inspired by his Brazil-born wife Sylvana.

The tug will be towed from Hillsboro Inlet Park in Pompano Beach out to the sinking site early on Aug. 19 and then flooded.  At 390 tons, Torode expects it will go down quickly.  Hundreds of boaters are expected to watch the deployment.

The project cost about $90,000, funded by chief sponsor Finlandia vodka and other private donations.

To book a dive on the newest wreck visit www.GuyHarveyOutpost.com.

It looks just like a giant, wide-open front-end loader plowing the surface of the Caribbean Sea, except it’s ALIVE.  A 15-foot long whale shark — one of hundreds that gather annually from …