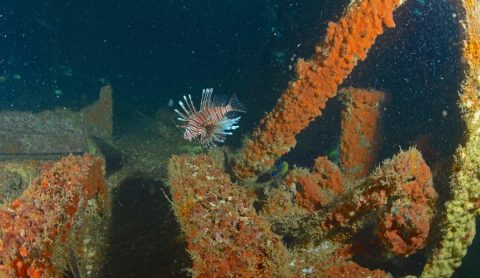 [Orange Beach, Ala.–]Scuba diving 90 feet deep on the sunken coastal freighter “The LuLu”, I was completely surrounded by a curtain of fish:  shimmering minnows; fairly large amberjacks chasing them; gray, red and vermillion snapper; and convict-striped spadefish.  The shifting schools covered much of the surface of the 271-foot ship.  A few lurid-colored exotic lionfish lurked around various ambush points, but unfortunately none of us aboard the Down Under dive charterboat had brought a spear gun.

Too bad, because we could have carried our catch over to the popular restaurant SALT at SanRoc Cay Marina in Orange Beach where the dive boat docks.  Chef Chris Sherrill and Chef Landon Benton would have prepared the lionfish in multiple creative dishes like they do with just about any other kind of fish their customers bring in. (More on that later.)  Meanwhile, we simply enjoyed the swirl of colorful marine life populating the wreck.

“The LuLu” is the largest shipwreck in Alabama’s vast array of artificial reefs, which include (but are not limited to):  Army tanks, culvert pipes, bridge rubble, oil and gas platforms, big ships, small boats, and planes.  Despite claiming only about 53 miles of coastline, Alabama boasts more than 14,000 manmade structures deployed in the Gulf from right off the beach to about 60 miles offshore, covering about 1,200 square nautical miles. In and around Mobile Bay lie another 30 smaller structures.  The state plans to deploy another 600 reefs from the shore out to 70 feet deep, and it’s almost ready to sink another big ship perhaps as early as this winter– a 250-foot retired oceanographic survey vessel called the Fairfield New Venture–in about 125 feet of water. 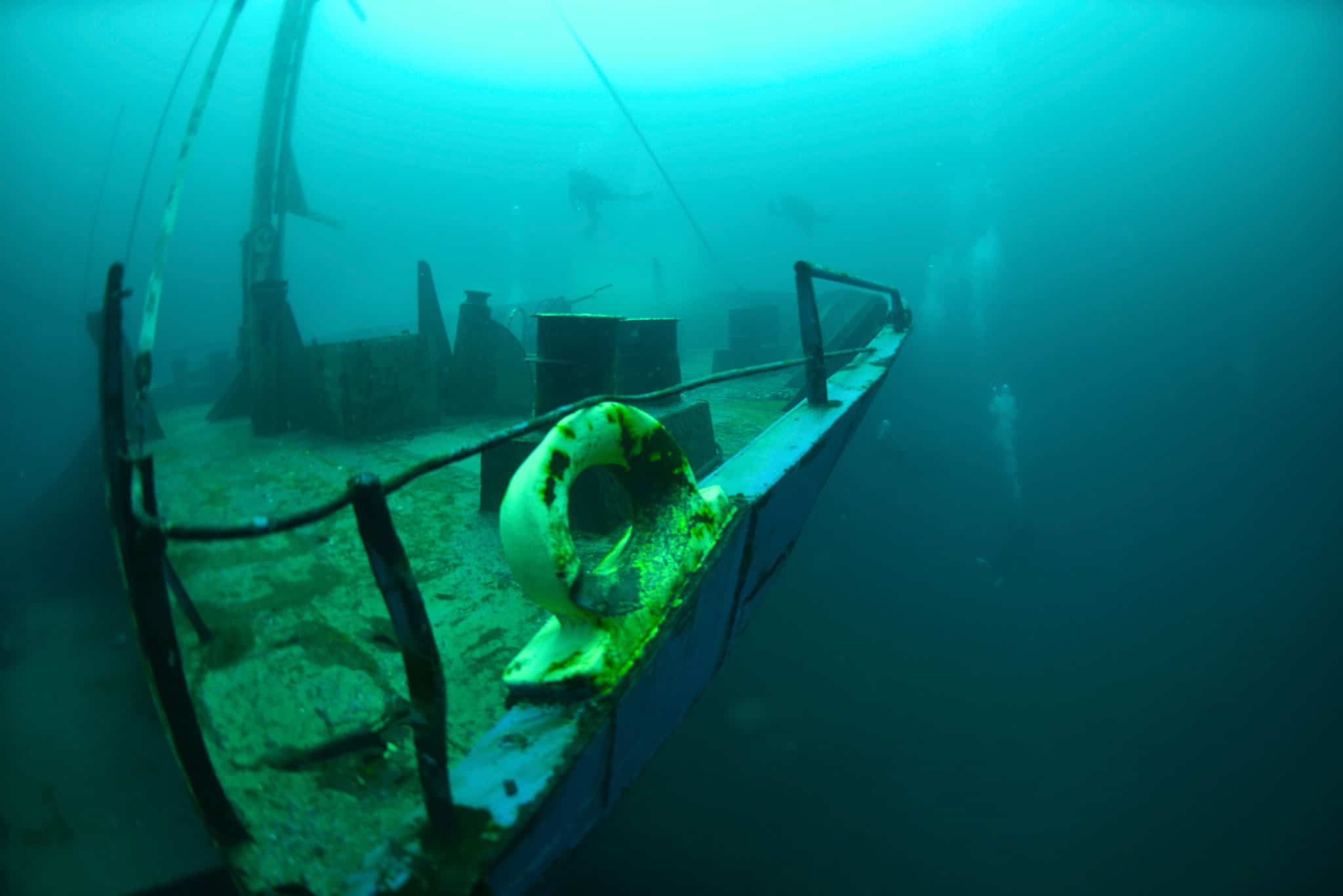 “We consider ourselves to have the largest and most productive artificial reef program in the country,” said Craig Newton, a biologist who serves as Alabama’s artificial reef chief.

For Newton, the artificial reef program is all about creating a diverse set of habitats for a wide range of marine animals– as well as diving and fishing destinations for the state’s residents and visitors.

“The more diverse you can make the artificial reef program, it’s better able to withstand fishing pressure and produce large numbers of snappers each year,” he said.

For example, Newton said, species like amberjack and snapper prefer larger, taller structures like ships and oil rigs while other species tend to favor smaller, shallower havens.  And he plans to create “stepping stone” reefs to establish connectivity between near-shore and offshore regions. Some species such as gray snapper spend their early lives in inshore estuaries, then head to deep water to reproduce. 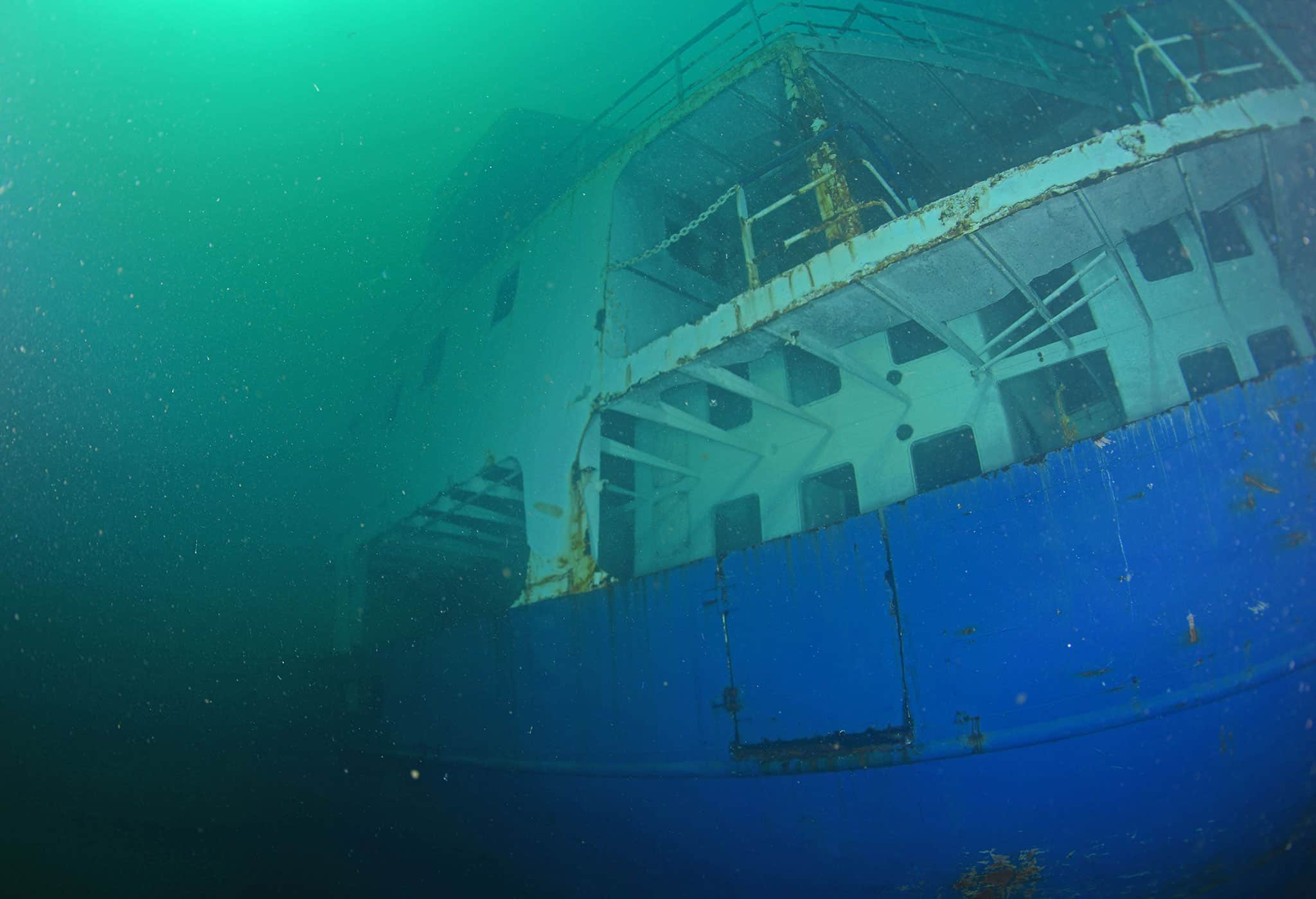 A big reason Alabama has so many man-made diving and fishing reefs off its shores is that in addition to its own deployments, it permits private individuals to sink their own — just as long as they are properly inspected  to ensure they don’t pollute the waters or pose a safety hazard.  While these serve as private honey holes whose locations are not published on Alabama’s artificial reef website www.outdooralabama.com/artificial-reefs/, anyone who stumbles across them may fish or dive them.

On my second dive of the day with Down Under, we visited the Captain Shirley Brown, a 128-foot ferro-cement ship that once served as a waterborne club before being sent to the bottom about 85 feet deep two years ago. On that dive, I saw more amberjack and snapper and even larger lionfish than on the LuLu, and my dive buddy Chandra Wright spent her safety stop 20 feet deep fending off a pesky remora that tried to stick to her wetsuit, then gave her a kiss on the cheek before swimming off.

That evening at SALT, Sherrill prepared a delicious feast for Wright and me and our party including a charcuterie of meats and cheeses, quail gumbo, and crabmeat-stuffed grouper with fresh vegetable succotash.  He told us to bring him lionfish the next time we dive, and said he could have created something from the remora if Wright had let it stick to her!  He wasn’t joking; he has whipped up culinary treasures from supposed ‘trash’ fish at other Alabama eateries.  And I bet it would have tasted great.

If you plan a visit to the Orange Beach, Alabama area, a great place to stay is the Hilton Garden Inn, located on the beach.  Visit HiltonGardenInnOrangeBeach.com.