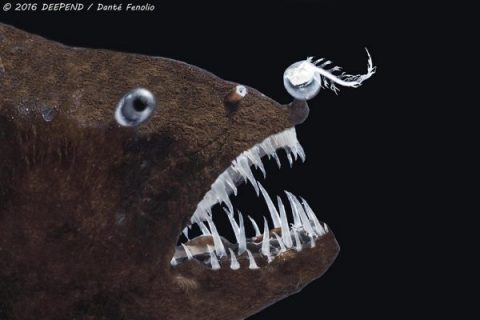 Inside several lockers on the fifth floor of the Guy Harvey Oceanographic Center at Nova Southeastern University near Fort Lauderdale are jars full of some of the weirdest-looking sea creatures that anyone has ever seen.

Cartoon-like miniature orange monsters with long, rapier teeth sticking out of their faces;  telescope fish with goggle-like eyes that retract into their heads; dragonfish that light up like Christmas trees; anglerfish that dangle lure-like appendages with actual hooks to entice their prey.

All were collected about 3,000 feet deep in the Gulf of Mexico by scientists from the Deep Pelagic Nekton Dynamics Consortium, or DEEPEND– a collaboration of nine universities and other research groups led by Dr. Tracey Sutton, associate professor at NSU’s Halmos College of Natural Sciences and Oceanography.  And the researchers are eager to share their never-before findings with the world.

“We want to make people aware of the life and diversity down deeper than anyone ever goes,” Sutton said.  “There’s ten times more pure mass of these deep-sea fish than the shallower-water fishes.”

Sutton and his colleagues began towing large pelagic trawl nets to collect specimens in the aftermath of the Deepwater Horizon oil gusher which spewed 210 million gallons into the Gulf and killed 11 workers in 2010.   The scientists were hired by the National Oceanic and Atmospheric Administration (NOAA) to find out what kinds of marine life lived down in the dark, freezing depths that may have been impacted by the spill.

The scientists netted over a million specimens of 700 different species that took them four years to identify. It’s the first baseline data set of its kind in the world. 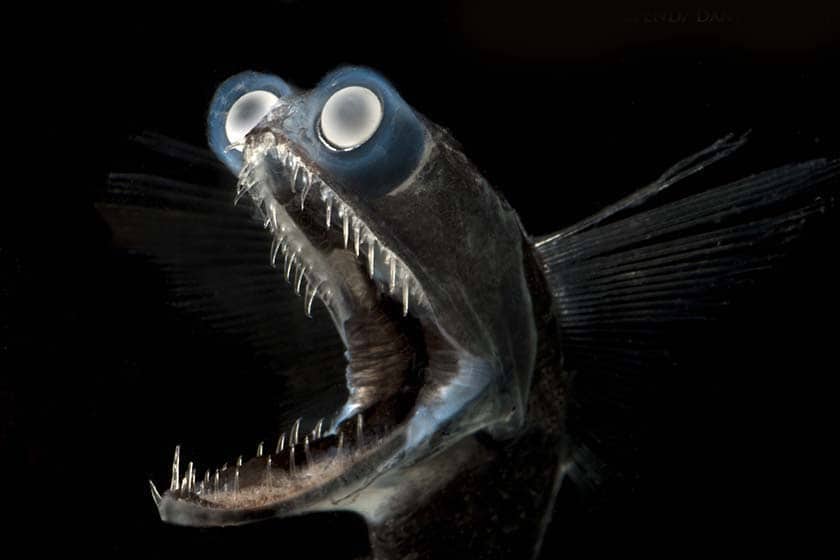 “There were over 60 species that had never been found in the Gulf, including a new species of anglerfish,” Sutton said.  ” Now we’ve got a big list.  The deep part of the Gulf may be the best known of all the oceans of the world.”

Besides looking very weird and flashing lights from various appendages on their bodies, Sutton said some of these deep-dwellers rise to the surface at night where they can be dip-netted. South Florida anglers sometimes find them in the bellies of the swordfish and marlin they catch.

You can check out photos and blogs on DEEPEND’s work at www.deependconsortium.org.  Scientists also give talks at boat shows, fishing clubs, and public and private schools to rave reviews.  They invite teachers to join them on their research cruises.

Now operating under a grant which expires later this year, Sutton hopes to extend DEEPEND’s work for two more years in order to find out how the oil spill may have affected life in the deep. Commercially and recreationally-important blue marlin and bluefin tuna are known to spawn in the waters where the disaster occurred, and one member of the consortium is studying the larvae of those two species to see if there are changes.

Sutton notes that following the 1989 Exxon Valdez oil spill in Alaska’s Prince William Sound, it took four years for that region’s first ecological collapse to occur. Today, more than six years after Deepwater Horizon, about one-quarter of the oil that gushed into the Gulf has not been accounted for.  And DEEPEND and others would like to determine the effects of the oil combined with Corexit, the toxic chemical used to disperse it.