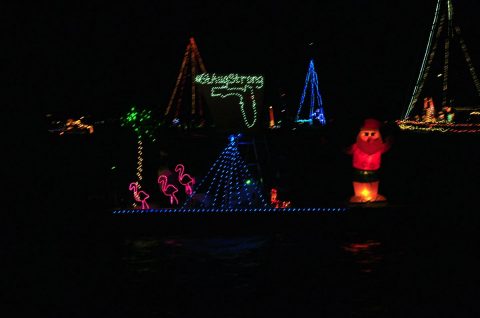 Deck the Boats with Lots of Lights in St. Augustine

A Santa village, palm trees, dolphins, an octopus, snowmen, a Christmas tree and lots and lots of lights decorated watercraft of all types and sizes that cruised the Matanzas River in St. Augustine’s 36th Regatta of Lights earlier this month.

The Twitter handle #StAugustineStrong was displayed proudly on more than one of the 29 entries in the boat parade, reminding the thousands of spectators how much the Ancient City has overcome since Hurricane Matthew raked the region with devastating winds and floodwaters in October.

“I think it says a lot that the boating community supports it as well as the people who watch it,” said regatta organizer Dan Floryan of the St. Augustine Yacht Club.

The yacht club–Florida’s oldest, chartered in 1873–has put on the regatta for the past 12 years; this year, it got some sponsorship help from the Florida Inland Navigation District, St. Augustine Port, Waterway, and Beach Commission, St. Johns County Tourist Development Association, and St. Augustine Marine Center.

Spectators were lined up four deep along the waterfront between the Bridge of Lions and Castillo de San Marcos as a cannon’s boom signaled the start.  The fleet made two passes in front of the judges’ reviewing stand, competing for trophies such as “most colorful”, “best theme”, and “best in class”.  Crew members played music and sang Christmas carols and other anthems as they cruised.

Floryan’s 38-foot sailboat sported a “North Pole Beach” scene that garnered third place for “best theme” in the over-25-foot category.  Other standouts included Victory III– a brightly-lit riverboat that won “most colorful” in the commercial class and the Black Raven pirate ship, whose stern castle and rigging were outlined in white lights and took “best theme” in the same class.

But it was John Zaruba’s schooner Freedom that won the night.  The 76-foot tour boat– a replica of a 19th-century blockade runner– took best in class and top overall honors for its strings of lights decorating the rigging and forming an American flag with the motto, “Let Freedom Ring”.

The parade boat crews celebrated their awards at a gala after-party at the yacht club– and immediately started talking about next year’s regatta.