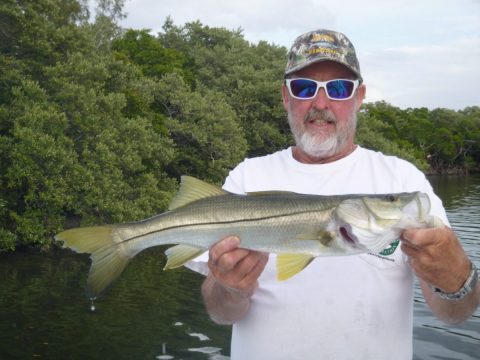 It was nearly sunset and the tide was starting to dwindle in the “Kitchen”– a generally fish-rich grass flat just off the small village of Cortez in northern Sarasota Bay.

Captain Scott Moore was broadcasting the waters with a Wiffle bat filled with shimmering live pilchards.  A flock of cormorants dived on them relentlessly, and Moore said, “Watch for the boils.”

About 40 feet from the boat, I spotted a bubbly eruption on the surface not caused by a bird and cast a free-lined pilchard there.  For a few moments my line was slack, but then it grew taut and began to peel off the spinning reel.

Booooo-sh!  A snook about 24 inches leapt clean out of the water and began racing toward the mangroves. I put the brakes on it, and slowly reeled it up where we photographed and released it.

Earlier in the day, Moore and his charter customers had released snook even larger in the area, along with some gator trout that would have been the envy of inshore anglers competing in a local tournament.

“The fishing in this area is phenomenal,” Moore said.

He ought to know. A long-time resident of Anna Maria Island just across the bay from Cortez, he’s been guiding in these waters since the 1970s.  Among his charter customers:  the late Bill Mote, founder of the prestigious Mote Marine Lab in Sarasota; the late Eugenie Clark, the first shark scientist at the lab before it was named for Mote; and prominent local philanthropists Carol and Barney Barnett.  About two years ago, the Barnetts donated $3 million to Mote’s Fisheries and Conservation Enhancement Initiative aimed at maintaining healthy snook stocks.  As part of the deal, the Barnetts established the “Captain Scott Moore Senior Research Scientist” position.  Not bad for a  high school graduate who worked as a cook before he took to the water some 40 years ago.

Moore guides aboard a 1981 Privateer tower skiff that he’s renovated several times, and picks up many of his customers at Annie’s Bait & Tackle  in Cortez.

Cortez, with a population of about 4,500, is one of the oldest authentic fishing villages in Florida.  Founded in the 1880s, it’s listed on the National Register of Historic Places and is anchored by A.P Bell Fish Co.– a wholesale seafood dealer operating here since 1940.  Stone crab, lobster, snapper, grouper, mullet and more are sold at Bell’s and at its adjacent restaurant, the popular Star Fish Co.

For sport anglers, the region offers many options:  right now, snook, sea trout and mangrove snapper are tops. From mid-May through July, tarpon — the ‘silver king’– takes the throne, as schools of the huge, hard-fighting game fish assemble near shore before heading to the deep Gulf to spawn.  In the fall, redfish can be found in good numbers.  Offshore, there are red and gag grouper and red snapper.

Moore and I quit fishing at dark and after he went home to babysit his grandchildren, I went over to the Swordfish Grill & Tiki Bar in Cortez where I heartily recommend the grouper bites.