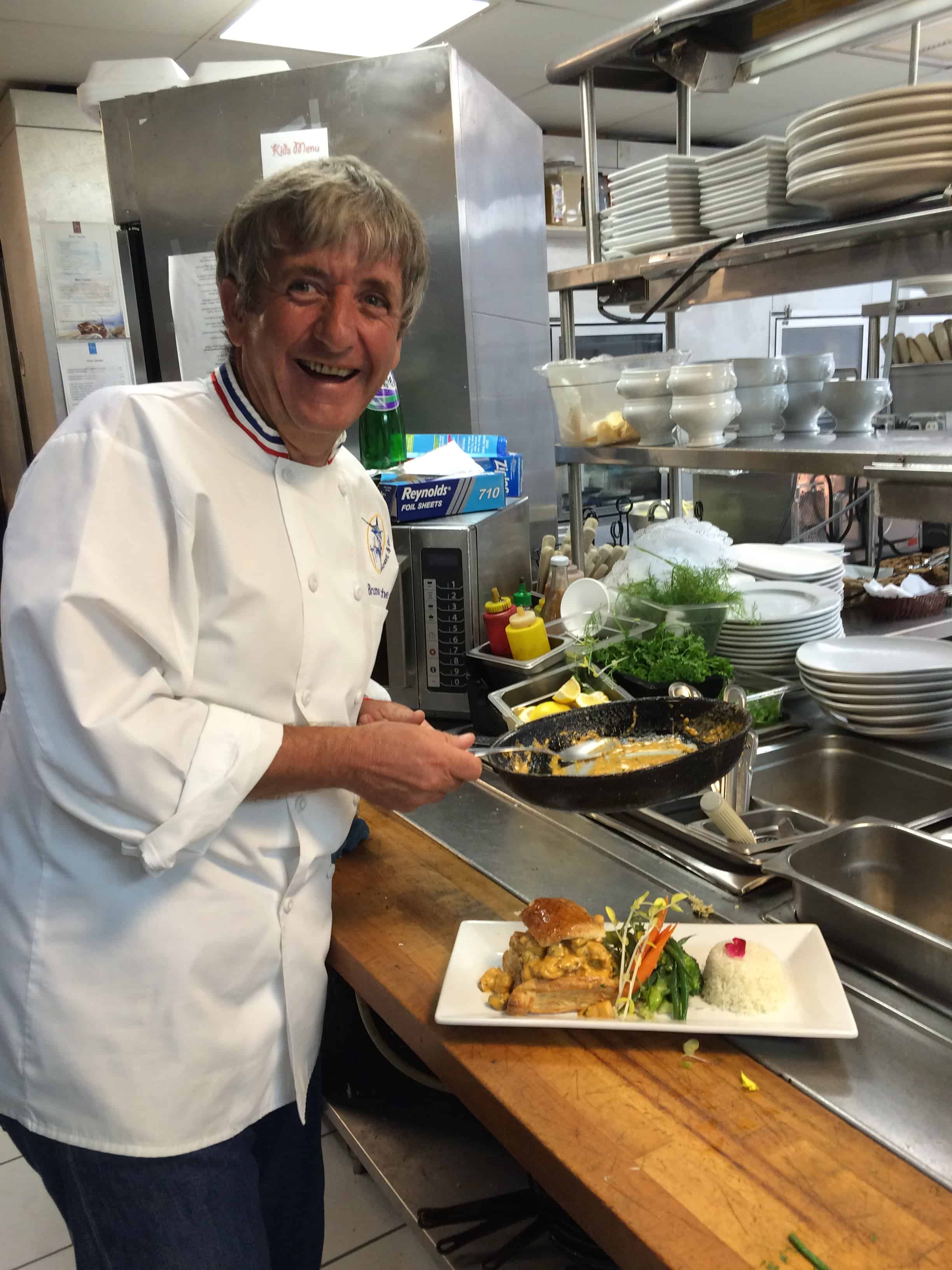 Chef Bruno Deluche and his crew at Guy Harvey’s Restaurant and Bar on Grand Cayman Island are helping to save the marine environment every single day with delicious servings of a  persistent, invasive species.

“We are one of the only restaurants that has lionfish seven days a week,” Deluche said.  “We buy them from the divers.  There’s a big demand for lionfish — lionfish tempura, blackened lionfish, lionfish ceviche.”

The candy-striped exotics native to the Indo Pacific are wreaking havoc with marine ecosystems throughout the Caribbean, South Atlantic and Gulf of Mexico.  They gobble just about anything they can fit in their jaws and they reproduce too quickly too be wiped out.  Encouraging restaurant customers to consume them is one way to help control their numbers.

“We love our job and we try to protect the planet as much as we can,” Deluche said.

Cooking has been the French-born chef’s passion since he was a teen helping his grandmother in her kitchen near Limoges.  He attended catering school at 16, received his diploma and left for New York, learning English in nearby Atlantic City, N.J.

Following stints at restaurants in London and Disney World’s EPCOT, Deluche decided to visit a friend living on Grand Cayman in 1996 and never left.  He opened the popular Cafe Med with a partner in 1999, but it was destroyed by Hurricane Ivan in 2004.

One of Deluche’s signature recipes is Vol-Au-Vent — snapper, mahi, scallops, shrimp and lobster in a velvet lobster sauce wrapped in puff pastry (see recipe below).  All the seafood ingredients are local except for the scallops.

“The fishermen dock in front of the restaurant and send me the fish,” he said.

In keeping with Guy Harvey’s policy of serving only sustainable seafood, Deluche does not have grouper, sea bass, marlin, sailfish, or shark on the menu.

The chef fishes recreationally in his spare time, but admits he’s not very successful.

Sauté four ounces each of lobster chunks; shrimp; snapper fillets; and scallops in olive oil and garlic, then season with salt and black pepper.

When nearly cooked, add two teaspoons of lobster base (available in grocery stores) and a few drops of brandy.

Sue Cocking chronicles the Guy Harvey Outpost travel and adventure experience in regular blog posts on GuyHarveyOutpostNews.com.  For 21 years, Cocking covered the full spectrum of outdoors adventure opportunities in South Florida and beyond for the Miami Herald, including fishing, diving, hunting, paddling, camping, sailing and powerboat racing.  She is a certified scuba diver and holder of an IGFA women’s world fly fishing record for a 29-pound permit.