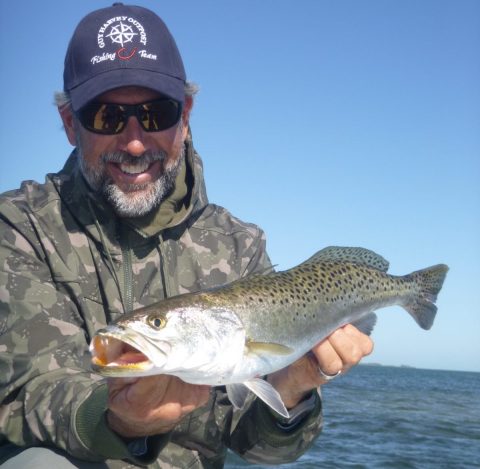 Casting a MirrOdine suspending plug to a submerged spoil island near the mouth of the Anclote River near Tarpon Springs, I wasn’t too optimistic that I’d catch anything.  The incoming tide was lackluster on the quarter moon and the wind whistled briskly out of the east at 20 knots– preventing us from venturing much further into the open Gulf in a flats skiff.

“Nature hunts here and so should I,” Richardson said.  “There are copious amounts of bait around those spoils.  Current seams, ospreys diving, wading birds……”

Just then, something smacked my bait so hard I nearly dropped the rod.  Light braid started peeling off the spinning reel:  this animal had BICEPS.

“Keep it steady,” Richardson advised quietly as the fish bucked and darted.

I finally brought it close enough for him to net– a 24-inch sea trout, fondly dubbed a ‘gator’ by inshore anglers for its size and teeth.  Well, that was a happy surprise!

But not to Richardson, who has been fishing and guiding here for the better part of three decades.

“The biggest aspect that sets Tarpon Springs apart is it doesn’t have the fishing pressure that areas down south have,” he said, referring to the busy waters of Tampa Bay.

“There are plains of healthy sea grass out here.  The water quality is the most pristine I’ve seen on the west coast of Florida.  It’s gin-clear.  It’s a gem.”

My gator trout was the first of eight that the host of Flats Class TV and I caught and released that morning.  And we weren’t the only ones enjoying bountiful fishing.  As Richardson battled a muscular fish off the flats, an osprey landed on a bar nearby with a full-sized trout in its talons.  When a great blue heron tried to steal it, the osprey took off– struggling to hold onto the fish.  It finally dropped its prize and had to dive to retrieve it.

When the trout action finally dried up, Richardson pointed the skiff northward to St. Joseph Sound where he and Flip Pallot once caught and released four cobia while filming an episode of Flats Class, now in its 11th season.

“You generally see them in two to six feet of water hitchhiking with a big Southern stingray,” he said.  “There’s an excellent chance of catching the ones on the back of the ray.  But if he’s free-swimming, the presentation has to be just right.”

“I like this one because it sinks quick,” he said.

Richardson only fishes with artificial lures–no live bait–and has taught thousands the finer points of this style of angling since he launched the Flats Class seminar series in 2001.

We drifted along with wind and current for awhile as Richardson scanned the shallows for the telltale wagon wheel shapes of a big ray being followed by a cobia.  A couple hundred yards away, I noticed a few other crews on skiffs that seemed to be doing the same thing.

Suddenly, Richardson fired a cast to something I couldn’t make out that was about 20 feet away.  His light spinning rod bent over double.

“Yep,” the guide replied calmly as he carefully steered it toward the boat.

Holding the rod in one hand, he flipped open a landing net with the other, placed the net beneath the struggling brown fish and lifted it on board.  It looked to be about seven or eight pounds–not large enough to keep–but a feisty fighter for its size.  We photographed it and let it go.

“How did you see that?” I demanded.

“First, I saw the white underbelly of the ray.  I made the presentation ahead of the ray and let it sink for two seconds.  Then I twitched it and the cobia jumped off the ray and started following my bait,” he said.

Here’s the thing:  even if you’ve been fishing for decades (as I have), there is always something more learn, and Richardson is not stingy about sharing his knowledge.

If you would like to bump up your game, make plans to attend Richardson’s Redfish Module class April 7-8 at the Vista Hotel on Lake Tarpon near Tarpon Springs.  Richardson and co-instructor Captain Dave Chouinard will let you in on what the pros know about catching one of America’s favorite game fish.  Seating is limited, so book your spot now at www.guyharveyoutpost.com/redfishclassmodule/.