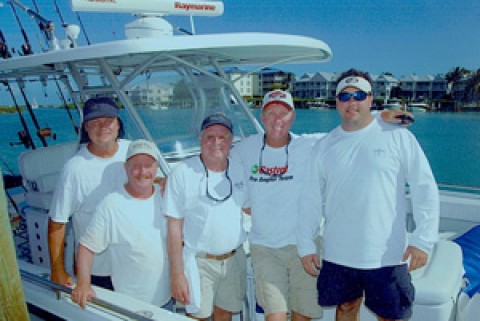 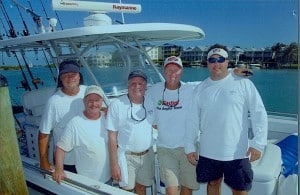 ISLAMORADA, FL—MARCH 15, 2016— They say the family that fishes together stays together, and for South Florida’s Davis family that tradition also includes supporting the Blazing Mako Tournament & Festival—a June event that will combine fishing, conservation, research and marine science scholarships.

Nova Southeastern University (NSU) and Guy Harvey Outpost Resorts announced today that Miramar, Florida-based C. Davis Electric has joined the tournament as a Presenting Sponsor, which includes two entries for the offshore tournament division and a shirt sponsorship.  In total, a $25,000 commitment.

The goal of the non-profit tournament and festival, scheduled for June 16-19 2016, is to raise $100,000 for marine science scholarships. NSU’s Halmos College of Natural Sciences and Oceanography, home to the Guy Harvey Research Institute (GHRI), the Guy Harvey Oceanographic Center research building, the Center of Excellence in Coral Reef Ecosystem Research and the Save Our Seas Shark Research Centre, will administer scholarship funds donated through the Guy Harvey Ocean Foundation (GHOF).

“C. Davis Electric and the Davis family have been friends of NSU for many years, and this new tournament and festival is yet another way they can combine their love of NSU with their love of fishing and the ocean,” said Richard Dodge, Ph.D., the dean of NSU’s Halmos College of Natural Sciences and Oceanography.  “We thank them for coming onboard as the signature sponsor— and for helping NSU students realize their potential by following their dreams.”

Davis Electric co-founder and owner Charles “Ed” Davis Jr. has long supported NSU, and the school’s annual sponsorship of the Fort Lauderdale Billfish Tournament, which this year was renamed the Blazing Mako Tournament & Festival and moved to Islamorada, known as “The Fishing Capital of the World”.

“We’re out fishing nearly every weekend in the Florida Keys,” said Mike Gagliano, a son-in-law and Davis Electric Executive VP.  “As a family we fished Keys tournaments for over 20 years as we have a house and boats down there.  Islamorada is a perfect spot for the tournament.  This is such a great cause and we’re looking forward to the competition.”

Tournament Director Cliff Jensen said corporate team registration for the offshore division is $5,000 per team (six anglers), with the registration fee for Inshore anglers competing is $2,500 (three anglers). To register for the inshore/offshore division go to http://www.guyharveyoutpost.com/blazing-mako/fishing.html. The tournament will also feature cyber on-the-water release documentation for research using the IGOfish App.

In addition to the not-for-profit fishing tournament, expansive plans also are underway for innovative art exhibits, live music, conservation organization displays and local vendors, all showcased in a 100-tent “Conchservation Village” to be located at the host property, The Islander, a Guy Harvey Outpost Resort. Also planned are a series of watersport competitions, (including a paddleboard competition), a Kids Pier Fishing Tournament, fishing seminars and a Rum Village.

As part of Guy Harvey Outpost Resorts’ signature Bonfire Series fishing tournaments, a fish-themed sculpture is created by a local artist.  The artist incorporates a conservation message with a “trash-to-treasure” concept, incorporating recycled material into a sculpture to be set ablaze.

In the case of the Blazing Mako Tournament & Festival, the sculpture will be a mako shark in the image of the NSU mascot. Local artist Pasta Pantaleo will incorporate steel with reclaimed parts to fashion together the mako cage with exposed beams.  The cage will then be filled with non-toxic flammable materials to create the tournament’s signature bonfire.