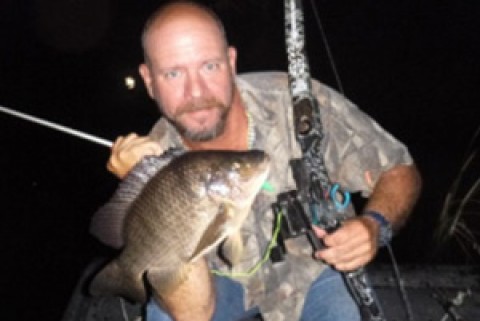 Captain Jason Peters stands at the helm of his airboat, sweeping the clear, shallow slough with the beam of his headlamp as his friend captain Bill Lepree wields a longbow from the bow. Suddenly, the light catches a small, brown torpedo-like shape just beneath the surface.

Lepree nocks an arrow, draws back and shoots, missing the target entirely.

“Aw, too high,” Peters coaches. “Aim low — shoot way under them because of the refraction of the water.”

Peters and Lepree were hunting blue tilapia– a tasty, exotic freshwater fish found in lakes, rivers and marshes throughout Florida. Archery and gigging are about the only effective methods of taking them because they eat mostly algae and other organisms that grow on water plants, and are not usually susceptible to hook-and-line fishing.

The hunting grounds this night were the open sloughs in the Everglades near Sawgrass Recreation Area in western Broward County. From December through March when water levels are lower, tilapia assemble like herds of miniature cattle in the shallows. Night hunting is preferred because the fish are much less wary than in daytime. But as Lepree discovered, nailing one is still a challenge– even under cover of darkness.

“If I had to do this for food, I’d be screwed,” Lepree said after failing to nail some 20 tilapia.

Peters got Lepree to within a couple of feet of his targets, but his shots either were too low or too high. Still, the newbie fish hunter relished the challenge.

“It’s hard,” Lepree said. “The hardest part is the depth perception– trying to shoot something underwater from the surface. Plus the fish are moving and the boat is moving and that makes it challenging.”

The pair spotted lots of other aquatic creatures in the headlamp as they cruised the flats: a 10-foot alligator, several frogs, grass carp, bass, bluegill, catfish, and mudfish.

Finally, Lepree managed to shoot a mudfish, but it wriggled off the shaft and threw a sizeable wake as it porpoised away on the surface.

“Wow! That made my night,” the veteran sportfishing captain said.

Peters took over the longbow and shot a handful of tilapia up to about five pounds. He also gigged a frog and a bullhead catfish. The hunters could have harvested as many tilapia as they wanted because the species is not native to Florida, and therefore not subject to size or bag limits or fishing seasons.

Blue tilapia come from North Africa and the Middle East, brought here in the 1960s as an experiment in sport angling and to help control the spread of some aquatic plants. But those plans went awry when some ‘bandit’ anglers took the fish from their inland enclosure and released them into the wild. Now they are widespread in south and central Florida. The state record is 9.38 pounds and was taken in the St. Lucie River in 2010. Fish in the two- to four-pound range are common.

Peters, who operates JP Outfitters guide service in Hollywood, has developed a thriving business guiding customers on night-hunting expeditions for tilapia. Even though Lepree wasn’t successful, he said he’d like to try again.

The Kissimmee area might be best known for its major theme parks, including Walt Disney World, and the other many attractions that Orlando has to offer. However, the Kissimmee Chain is also one of the …

I Am Woman; Watch Me Fish

By Sue Cocking scocking@guyharveyoutpost.com Plenty of women would love to fish with their husbands and boyfriends, but feel intimidated because their partners don’t take time to explain what’s …