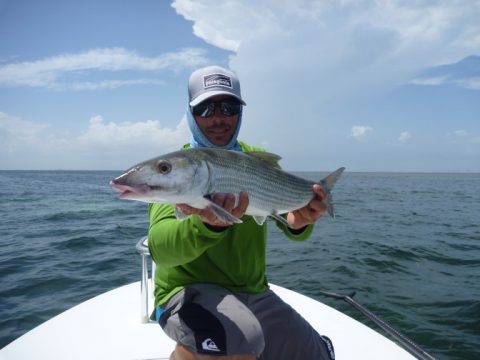 Beginning as soon as this fall, fisheries scientists will attempt to do what no one has done previously:  spawn and raise bonefish in captivity.

The non-profit Bonefish & Tarpon Trust (BTT) has teamed with Florida Atlantic University’s Harbor Branch Oceanographic Institute in Fort Pierce, FL. to launch the five-year project with a $1.5 million grant from the National Fish and Wildlife Foundation. BTT plans to raise another $1.5 million in matching funds.

The future of the Florida Keys’ flagging bonefish population– which generates more than $465 million annually to the local economy– may hang in the balance.

Bonefish numbers in the Keys have been on the decline for more than a decade– particularly in Florida Bay, and BTT researchers and their scientific colleagues have been trying to determine why.  In the meantime, they are examining ways to shore up the population and have determined that aquaculture, or fish-farming, may be a viable tool.

Dr. Aaron Adams, BTT director of science and conservation, says Harbor Branch was the easy choice to anchor the project.

Harbor Branch has decades of experience in fish culture, raising multiple species of finfish and shellfish successfully.  Meanwhile, BTT and its collaborators have spent years studying the spawning, feeding and movements of bonefish in the Keys and Bahamas.  They’ve learned that spawning takes place on new and full moons at certain deep-ocean locations. They’ve determined the salinity, water temperatures and light levels for reproduction.  Now they have to figure out how to induce captive bonefish to spawn and then how to feed the larvae that is produced.

“It’ll be a challenge, but one I’m sure we will work through,” Adams said. “Once they’re juveniles, getting them to eat and grow shouldn’t be a problem.  Juveniles adapt to tanks and start eating quickly.”

Several bonefish from South Florida and the Keys, size juvenile and larger, currently reside in Harbor Branch’s tanks, feeding and swimming around happily.

The restoration mission is critical, according to Adams and local fishing guides and anglers.

“We need to give the Florida Keys population a boost to the level they can sustain themselves,” Adams said. “We’ve given ourselves a five-year time window to get this accomplished and we’re going step-by-step.”