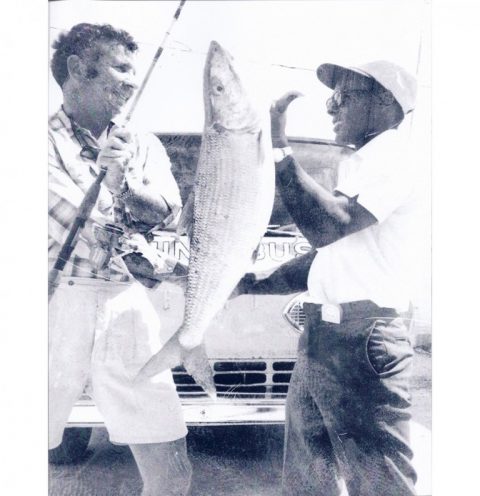 Journalists and Residents Mark The Occasion with Tournament and Parade

ALICE TOWN, BIMINI—MARCH 7, 2011—In 1971 a Virginia Beach sportsman named Jerry Lavenstein and local Bimini bonefish guide Ansil Saunders headed out on the Bimini mud flats to cast their luck and hope for a trophy catch.

Jump ahead to early 2011 and new Big Game Club Outpost owner, celebrated artist Guy Harvey and his group of partners, had just opened a new outfitter operation, Bonefish Bimini with fly fishing guru Vaughn Cochran at the helm. Celebrating the 40th anniversary of that record bonefish catch just off their docks made good sense to Dr. Harvey and his Outpost team, so the first annual Bonefish Challenge was born.

The Bonefish Bimini team invited some of the world’s top fly fishing writers to officially commemorate the occasion this past month with a bragging-rights tournament and local islanders pitched in with a junkanoo style parade, complete with a paper-mache replica of a bonefish and a grand marshal lead boat float led by Ansil Saunders, now considered the dean of Bimini’s legendary group of bonefish guides. Cochran, also a well-know marine wildlife artist, made the parade a viral global event, by encouraging fans to enter a virtual parade design entry to celebrate the record catch anniversary.

As for the journalists, awards went to:

The biggest award of the day went to Ansil Saunders, who received a plaque honoring the record catch, complete with a picture of he and the late Jerry Lavenstein admiring their record catch.

Today, Bimini is home to three Bonefish world records as well as being recognized for some 50 record setting catches in its surrounding waters.

A top-of-class bluewater tournament comes to Bimini on May 18th with the Billfish Invitational, which marks the Big Game Club’s return to a world-class tournament, after a decade long hiatus.