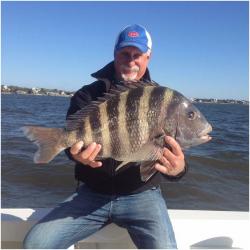 Kevin Faver is our St Augustine Fishing Team Captain. He is a 4th generation from Florida and has been a licensed charter Captain since the age of 18. He started hunting and fishing with his father and grandfather at the age of five and learned from one of the best captains around, Captain Mike Scanlan. At that time, Capt. Mike took him under his wing and was an incredible mentor. He taught him not only how to be a better fisherman but how to become a top-notch charter Captain. Captain Mike taught Kevin his knowledge of catching tarpon on the First Coast and to this day it is a passion of his. Besides being an avid tarpon fisherman Capt. Kevin also fishes for cobia, kingfish, sharks, and anything else that wants to participate. During the cooler months, most of his trips are in the backwaters fishing for reds, trout, and flounder. Speaking of cooler months, Capt. Kevin’s focus is bow hunting in the fall. He has property in Georgia that he absolutely loves to hunt and take care of. But he also travels the Midwest in search of big whitetails. Don’t call him for a charter in November because most likely he will be in a tree stand! Kevin also enjoys spending time in the outdoors with his wife, kids and granddaughter. They spend as much time outdoors as possible. “Passing on the legacy of hunting and fishing to my children and grandchildren the way my dad passed it on to me is one of the most important things I can do as a father”. Faver says. The outdoors is a great way to spend time with your kids and grandkids and teach them respect and responsibility”.