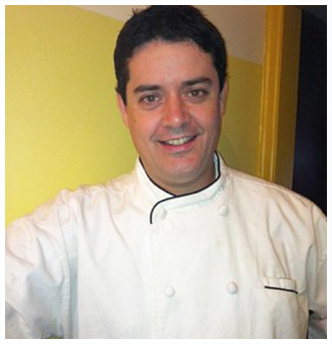 Chef Aaron Schweitzer is the chef at Rumfish Grill at the Guy Harvey Resort St. Pete Beach. Like many chefs-in-the-making, Aaron Schweitzer started young. He and his family vacationed on the Outer Banks and, at 17 years old, he thought he’d try to get work there and stay the whole summer. He landed in a kitchen run by a Culinary Institute of America graduate. The experience had a huge impact on him as he worked his way up from dishwasher to food prep by the end of the summer. Schweitzer went on to attend Pennsylvania Culinary Institute and has worked in cities such as New Orleans and Charleston before moving to Wilmington, NC. There he was the Chef de Partie at a private country club for four years before moving into a new direction as the Chef for Circa 1922. Throughout the following 14 years, he assisted in opening various concept restaurants to include Boca Bay, Prima, Osteria Cicchetti , The Grand Union Pub , The Kitchen and Osteria Cicchetti II. He’s led a varied career when it comes to cuisine styles, but he says all food really follows the same principles. “Just keep it simple.” Hometown: Dayton, Ohio. First food memory: Making doughnuts when I was 7 with my mom. Something you’d rather make than buy: Gnocchi. I like to make it with ricotta, eggs and flour. Favorite sandwich: Reuben. Favorite beverage: Spaten Optimator. Memorable meal: When I was on a surf trip to Costa Rica, we had mixed fish, including shellfish, served with salad – which was really just red cabbage with vinegar and oil. It was just simple, fresh seafood seasoned with butter and garlic. Favorite cookbook: It’s not really a cookbook, but The Food Lover’s Companion. Celebrity guest: I cooked for the Beastie Boys when I was in New Orleans.