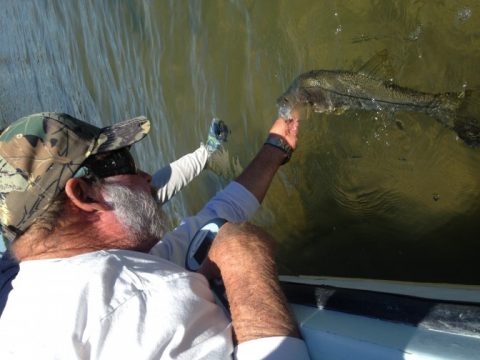 Scores of fishing tournaments were held all around Florida on the weekend of April 8-9 targeting sailfish, kingfish, redfish, and other inshore and offshore species.

But none was anything like the William R. Mote Snook Shindig on Sarasota Bay.

A record field of 60 anglers braved rough waves and cool temperatures in the tournament’s 12th year to catch, log and release as many snook as possible.  But they looked extra hard for fish bearing internal and external tags because they were the main targets:  snook raised in Mote Marine Laboratory’s aquaculture park and released into the wild.

The purpose of this one-of-a-kind contest, according to Mote senior scientist Dr. Ken Leber, is to learn how many stocked snook actually make into the fishery.

“This is a research tournament,” Leber told the anglers before sending them out onto the water on the night of April 8. “You are all citizen scientists tonight.”

Snook is one of the fish most revered by Florida saltwater anglers whose sport generates more than $7 billion for the state’s economy each year.  But increased fishing pressure, loss of mangrove habitat, prolonged cold events, and red tide have hammered the stocks over the years.  Since the early 1990s, Mote scientists have been working with the Florida Fish and Wildlife Conservation Commission to determine if re-stocking hatchery-raised fish is an effective method of shoring up the population. They’ve released more than 54,000 tank-raised snook in Sarasota-area waters since 1997.

Some of those fish bear internal tags that, when scanned with a special electronic wand, reveal exactly when, where and how big the fish was upon release.   Others have small external wire tags that must be removed from the fish in order to identify it. The tournament awards extra points for catching tagged fish.

“We learn how these fish are moving around and what they’re doing to understand the impact of hatchery releases on the abundance of the whole stock,” said Mote snook researcher Dr. Nathan Brennan. “If we only see one recaptured hatchery snook, I’m happy.”

Brennan got his wish: of the 155 snook caught, logged and released, only one was determined to be raised in the hatchery.  The fish, a 17-incher, had been released in 2014.  It was caught by Kellie Dietz of Sarasota fishing with her son Paul.

“I can’t believe I did it,” Dietz said after collecting her prizes of original artwork and other gear.  “Very cool.”

The largest snook was a 35-incher logged by Hunter Hull of Sarasota.

The tournament honored veteran Southwest Florida guide captain Scott Moore whose contributions to research and conservation resulted in a Mote research chair being named after him.

On tournament day, Moore guided Gary Poyssick and Alex Burnett of Online Fisherman and me to catch and release a dozen snook– none bearing tags.  Our party also released a flounder, a couple of redfish and trout, and a juvenile Goliath grouper.

“To have a sustainable fishery, aquaculture has to be a part,” Moore said.  “If we get to where we have a real bad problem, it could save the fishery.”

Mote scientists expect to release as many as 10,000 hatchery-raised snook into the bay this summer.