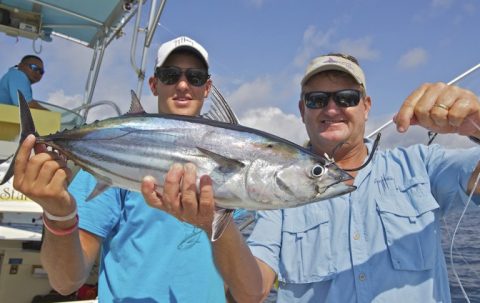 It has come to my attention that that there is some concern, particularly among anglers in the northeast US, about my allegiance to the sport fishing community. Please know that first and foremost I am a life-long angler who loves nothing more than spending a day on the water in pursuit of big fish. It’s my passion and my profession, and I live it practically every day of the year. I am also a dedicated conservationist – I believe that we must fish responsibly and ensure the health of fish stocks throughout the world.

In an effort to broaden the message of responsible fishing, the Guy Harvey Ocean Foundation (GHOF) has supported, collaborated and partnered with many organizations over the past four years, including the Shark Free Marina Initiative (SFMI). Sharks are in serious trouble in the US and around the world. However, I am not advocating for a ban on all shark fishing. My position has always been for all anglers to take a responsible, conservation-minded approach to sharks – before you legally harvest a shark, simply consider what you are doing and why you are doing it.

The shark free/friendly concept was initiated to educate and make people aware of the severe pressures being put upon sharks populations around the globe. In the past several years, we have seen many shark tournaments – particularly in Florida – go to an all-release format, which makes for responsible fishing since most of the species of sharks caught in tournaments are traditionally not good table fare.

In contrast, the iconic mako shark is considered fair game in the northeast US, as are tunas and swordfish above federal size limits. Catch and release shark tournaments in this area with high minimum qualifying weights are well organized and have shark conservation measures at heart, as do the partial release billfish tournaments in the mid-Atlantic, which I have proudly supported for over two decades.

In addition, in the US and around the world there are areas of local abundance of species where anglers can legally harvest these species in a sustainable way, even though elsewhere in the world that species may be considered rare or overexploited. This practice is fine with me. I am all about sustainability in sport fishing and commercial fishing, as well as in spearfishing and diving. However, there are many anglers who are not concerned about sustainability and that is cause for concern.

Much of the recent criticism directed my way has stemmed from the role of the Humane Society of the US (HSUS) within the SFMI organization, and alleged ties to PETA and the PEW Environment Group (PEG). I have difficulty in accommodating the role of the HSUS in the sport fishing arena. Other than encouraging catch and release where possible, I see no reason for this organization to exert any influence in sport fishing. I have an even stronger opinion of PETA, which is just too extreme to even get my attention.

As for Pew, I am not aligned with them personally, nor have I supported them during my 20-year tenure as a board member of the IGFA. The one instance in which I worked alongside PEG was in a successful effort to prevent the archipelago of the Bahamas – which was home to the last bastion of sharks in the western Atlantic – from being scoured of sharks by impending commercial interests. The GHOF’s collaborative effort with PEG and the Bahamas National Trust worked, and it prevented the wholesale slaughter of species by people who don’t give a damn.

I also support shark interactive programs and have patronized many such programs in different countries. These interactions with otherwise shy, elusive creatures are inspiring, educational and very entertaining – all without killing a single animal. In addition, the socio-economic value of these interactive sites is immense to the host countries. Only days ago, I returned from a shoot in Isla Mujeres, Mexico where for 60 days each summer thousands of whale sharks gather to feed on plankton blooms and fish spawn. This interaction pumps millions of dollars into the Mexican economy each summer. If this phenomenon occurred in the Orient, then I am certain the harpoon boats would be racing the snorkelers to the sites every day.

Another issue I have difficulty accepting is proposed MPAs based on nothing other than whims of people who want to get rid of sport fishing. These proposed areas, which are closed to sport fishing, typically do not go through a scientific analysis to tell us all about the inventory of species or the estimated biomass from which a regulated harvest could be managed. However, specific time and area closures for certain species at certain times of year do work well. It is ludicrous to allow any harvest of any animal when it is reproducing, so closure of reef fish (snapper and grouper) spawning aggregations during their respective spawning times is a good management practice, as we have seen in the Bahamas and Cayman Islands.

There are many issues facing recreational anglers and many of us have conflicting opinions on how to apply solutions that best benefit the fisheries. Not everyone is going to agree with me on every issue. However, please don’t underestimate my dedication and commitment to the sport fishing community – along with AFTCO, I put back approximately 10 percent of all royalties generated by my art into fishery research and educational programs around the world.

I want to remind my fan base – as well as all of the naysayers – that I love fishing and I love to cook and eat the fish that I catch. I do fish responsibly – I release all billfish and undersized wahoo, tuna or dolphin that I catch. But, a nice bull dolphin, yellowfin or blackfin is going in the cooler! Swordfish are also fair game – in the tournaments we have in Cayman the small ones are released and the big ones are taken. In fact, we just landed a 600 pound plus swordfish on July 22 in Mexico. Not a scrap was wasted!