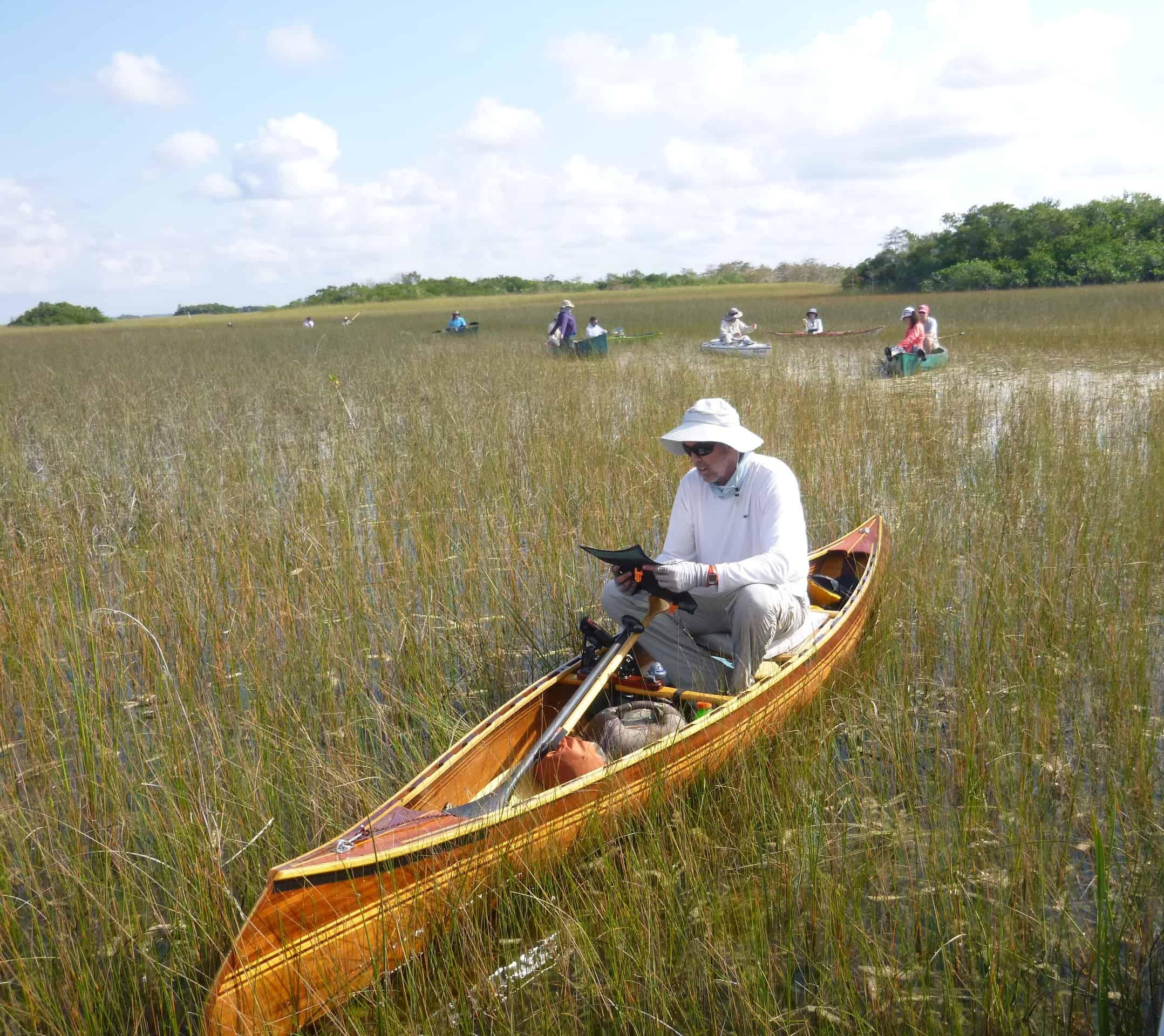 Paddling the marshy interior of Everglades National Park makes you feel like you are the first one ever to explore the region.  You won’t see any humans other than your companions.  You won’t encounter much trash, save for a stray deflated Mylar balloon here and there.  The only mechanical sounds you’ll hear come from the occasional small airplane overhead.  You come to truly appreciate the exquisite natural beauty of this vast 1.5-million-acre wilderness known as the  “River of Grass”.  And you will really, really wish that it was more river and less grass–especially after 22 miles of slogging in a single day.

A group of about 20 men and women whose names will be withheld to protect the uncertain status of their mental health embarked on Halloween on what was supposed to be a day-long exploration of Taylor Slough extending from the park’s Homestead entrance southwest to Nine Mile Pond near Flamingo.  The trip was the brainchild of a veteran local Everglades explorer we’ll call “Tom” who leads these out-of-the-way paddling adventures annually, dubbed “Invitationals”.  “Tom” never follows the trails on park brochures, instead mapping out his routes using Google Maps and GPS.

Setting out before dawn in canoes and kayaks from an airboat trail that used to be the Ingraham Highway pre-dating the park’s 1947 establishment, the group pushed, pulled, poled and paddled for hours through thickets of spikerush, sawgrass and periphyton — a spongy algae variously described as elephant snot or monkey puke. It actually smells pretty good, kind of like PineSol.  But it is no fun to navigate, especially when your paddle blades catapult thick wads of it onto you and your boat.  Unseasonably warm temperatures and very little breeze added to the discomfort.

The going was so slow through the shallow water and dense grass that the group hadn’t covered even half the distance by the time we stopped for lunch in a small patch of shade beside a tree island.

While everyone was breaking out their water bottles and lunchboxes, one paddler suddenly flipped upside down in his kayak.  At first, I thought he’d been startled by a snake or something. But when he didn’t crawl out from under the kayak right away, several people nearby leapt from their boats, pulled him out of the water and righted his boat. He was conscious, but pale and dazed.

One of his rescuers, fortunately, was a physician who checked him out, pronounced a touch of heat exhaustion, and said he would be fine after taking in electrolyte fluids.  But he was too run down to paddle much, so he took my spot in the bow of Tom’s canoe and I took over the kayak.

I would like to say the trip became easier, but only in small increments.  Water levels rose a bit higher as we neared Craighead’s Pond– site of a raised platform and defunct science experiment.  But after a couple more miles, I was growing tired from the drag of the grass and the constant shipping of slimy algae into the kayak.

To no one’s surprise, the sun set and the sky grew dark well before we entered the mangrove labyrinth of Nine Mile Pond.  Nearly everyone had headlamps or flashlights and GPS units that tracked true, so there was little chance of getting lost.  But of course, hordes of mosquitoes and gnats appeared as soon as the light faded, making an uncomfortable journey even worse.  At least the air cooled off.

But with about five miles yet to go, I was pretty exhausted.  At our next rest stop in the dark, I traded the kayak to a young woman triathlete in exchange for her seat in her uncle’s canoe. Paddling in the bow with him in the stern felt like a spa day compared to mushing in the kayak.

With no further misadventures, the entire group somehow arrived safely at the Nine Mile Pond parking lot about 8:45 p.m.–  a distance of 22 miles in 13 1/2 hours.

As we made landfall, my canoe partner began whistling the Hallelujah Chorus from Handel’s “Messiah”– wrong holiday, but an entirely appropriate anthem under the circumstances.

Back in 2001, Upper Keys florist and avid animal rescuer Sharon Mahoney Ellenwood asked her fishing guide husband Billy, “Why aren’t there any women’s fishing tournaments in the Keys …